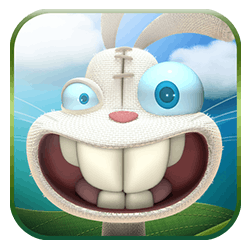 Wonky Wabbits is a video slot game released in 2014 by NetEnt Gaming Provider which is one of the best video slot game developers worldwide. NetEnt was established in 1996. It has grown to become one of the most respected casino game provider with products that are enjoyed worldwide by players irrespective of their age and skill levels. So it is only expected that wonky rabbits fully replicates the glow and marvel characteristic of NetEnt games.

The wonky wabbit slot game features a simple yet superb design with fantastic details like flock of puffy birds, flying across the blue sky display of the game occasionally and the wabbit which pop up occasionally while the game is on.

Let us ride to learn about this slot sensation, shouldn’t we?

The game can be used as entry point game for new players interested in spinning the reels as there’s not much bonus and other features for a player relatively new to casino games to worry about. The display is clear with a vivid display of a player’s bet level; the number of lines a player is betting on, total coins and amount won so far. Sound effects can be turned off and on or the volume adjusted based on the player’s preference. Try Wonky Wabbits on Casumo with a bonus now, or continue to learn about the slot.

A player can play automatically by using the autoplay option which gives players the privilege of spinning the reels up to a thousand times.

The Theme: the background is a hilly landscape with far-off mountains, a green row of gardens, carrots plants dotting the landscape, and fluffy looking birds flying across the blue sky.

Symbols: the major symbols of wonky wabbit are vegetables such as carrots, maize and tomatoes. While the minor symbols are A, J, K, Q and 10. The game is an easily understandable game that leaves very little for the player to struggle with. Most players often times use the auto-play option and hope on luck to come out with any winnings.

The game has just 1 wild symbol, with no scatter symbols/free spins. A player can only have the chance of winning big only when he/she lands multiple wilds on a screen. The wins pay from left to right, right to left. The wild represents the bonus.

The wilds are created only when ‘wabbit’ eats up the wilds. The winning combinations are created by the burrows which are below the reels.

Wonky wabbit does not offer players a separate bonus game. However, if a player gets 2 wilds, it automatically duplicates to 4 wilds, etc. A player can only get a maximum of 7 wilds which duplicates to 14 wilds and can result in winnings of up to 20x the wagered amount.

You should watch out for the wild which is represented by purple-dotted symbols with ‘wild’ boldly engraved on it in yellow colours. The wild duplication feature of wonky wabbit is automatic hence the player needs not to have any special knowledge or skill about Wonky wabbit

Wonky wabbit does not feature jackpot offers for players but it does features winnings that are decent enough for players.

Wonky wabbit is not available on mobile devices but can be enjoyed on desktop and laptop using a good web browser.

Wonky wabbit is a game which offers players the chances of winning big only if they are patient enough. We will point out that this game is a non-interactive game which appeals more to players that finds fun and excitement in watching the reels spin all by itself while they hope to win big. On the other side of the fence, it can be a boring game for players that love to take part in the game instead of watching and waiting on a chance to come up with big winnings.

Overall, we find this online slot game exciting and endorse it with our honorary recommendation.