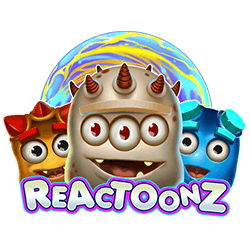 Reactoonz is a game that is created by a software developer that has made its mark in the casino industry. The pedigree of Play’n Go means that this developer need not outdo itself because of the quality and consistency of the games it has produced over the years – with a reputation already established.

However Play’n Go definitely outdid itself this time with the creation of Reactoonz Video Slot – encroaching into the realms of wonder. Reactionz slots is one of its latest addition to an archive of madly impressive online slots.

This cuddly alien character video slot is built on a 7x7 grid which utilizes a cascading engine that gives players the opportunity to hit consecutive wins on each spin. Quite a few people are skeptical of these alien characters but you need not be. The aliens are not here to take over the earth; no more than planetary fun things.

Reactoonz, as can be seen, is a 3 Dimensional online slot game with flexible limits to cater for the haves and the have-nots. You can have a satisfactory amount of fun on this game from as little as 20p right up to £100 for the big players in some serious green.

Any winning symbol the player achieves will be taken and this can activate either of the 5 bonus modes. These are Alteration, Demolition, Incision, Implosion, and lastly, Gargantuan. All the bonus features contain wilds which you can either destroy or you allow new wilds to be collected to the reels.

Apart from this, there are three random bonuses specifically placed to make things more exciting - as if it wasn't exciting enough already. These are:

This game is reminiscent of Microgaming's other cool game titled "emoji planet" but we just might be wrong about that.

This video slot is not your everyday 5 reeler. There are cascading reels with a humongous amount of wilds. When you get a wild symbol win, it will transform and then you have the opportunity to activate one out of the five Quantum features as you climb up the meters.

The plays are enhanced with symbol destruction of insignificant value, with colliding wilds alongside a huge barrage of wilds (Gargantuan). All this action add up a 1*1, 2*2, and 3*3 wilds. Apart from this, the transformed symbols oblige you with random wilds and symbols worth 2x wins alongside 4 same symbols.

This online video slot utilizes a cascading feature for which symbols collect on a grid layout of 7*7. You can get horizontal or vertical winning combinations which are formed when you score 5 and above in a cluster.

The core thing unique to this game is about keeping on winning to replace new symbols. When you keep getting the wins, the cascades keep ongoing. Every win gets you the Quantum Leap Charge Meter to be added by 1.

This starts with symbols of 3 to 6 and becomes wilds when the ones adjacent are destroyed.

This is a symbol of little value which is randomly picked and turned into another symbol. Should a low-value symbol not be available, a high-value symbol will be selected.

Values of insignificant value are destroyed and cleared from the grid.

A wild is divided into two halves which move through the grid. A selected random symbol that is similar is then chosen. When the Quantum meters are fully stocked, the Gargantoon feature opens with a 3x3 wild added to the grid.

The Gargantoon first splits into 2 x 2 wilds after which it splits further into 9 1x1 wilds. Failure to land a winner triggers the random quantum feature. These features can be altered which gives you the opportunity to get a few more winning combos.

This is a feature that is activated when a low random symbol shows up in a winning combo.

The biggest prize on this non-progressive jackpot is 4700x of your wager. There are four high-paying and low-paying aliens each alongside a vortex wild. The maximum cash prize is given by the pink alien with 5 each giving you a maximum 750x per bet line.

You can get a chance to play the 2018 release on all your mobile devices including your phones and tablets. This makes it easy to make war against gargantoon and his alien horde wherever you may be.

This game had plenty of ups and downs. Firstly, there are no free spins which are quite a bummer and it gets worse because making it to Gargantoon is quite a daunting expedition.

However, there is much on the good side to cover that scar. The theme is incredibly nice, there are a load of bonuses and you have a chance to make 4750x your wager on one spin. On the whole, the pros outweigh the cons and Reactoonz is a game worth trying out. So Reactoonz earns our recommendation, here at GambleGenie.